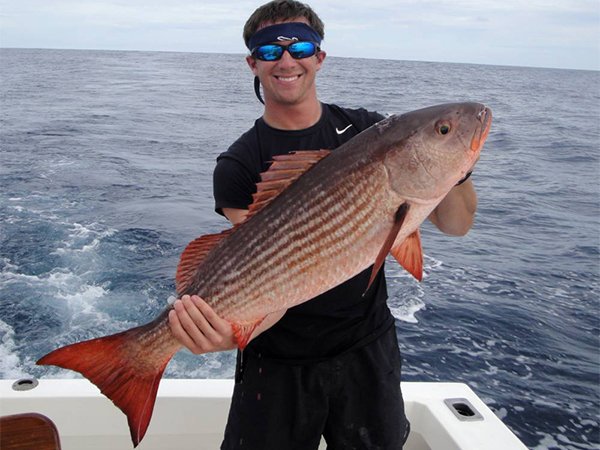 Typically found in large schools feeding alongside spinning Dolphin, the Tuna in Costa Rica can be caught year round and can easily top 300 lbs. Several species of Tuna are found down here, and all of them are known for their impressive fighting power. Once on the line, Tuna often go on “deep” or “long” runs and fight with power and tenacity. So, whether you have a 30 pounder or 300 pounder on the line, a Yellowfin or Big Eye – you are in for a good time!

While catching a “cow” Yellowfin Tuna (as trophy specimens are called) makes for a great photo op – a Tuna of any size makes for great eating. And, since Tuna is one of the species we are allowed to keep and eat. You’ll be going home with more than Instagram worthy snapshots.

TYPE OF TUNA IN COSTA RICA

Yellowfin, Skipjack and Bigeye Tuna can all be found in Costa Rica. They are all fun to catch and delicious on the dinner plate. The most common catch by far is the Yellowfin, but you won’t hear us complaining about that!

Yellowfin is arguably the most delicious of the Tuna family. It can be enjoyed any number of ways (i.e. tuna steaks and tuna burgers are delicious). But, if you enjoy sushi, you should try your catch – especially the Yellowfin – sashimi style with soy sauce and wasabi. You won’t be disappointed!

As previously mentioned, Tuna can be and is caught year round here (it is even caught by accident quite often while targeting trophy species such as Marlin or Sailfish). It is especially common to catch “footballs” (as 10-20 lb Tuna are called) all year long. However, there is a distinct season for Tuna fishing in Costa Rica, which even differs from the Tuna Seasons of its neighboring countries’ (Panama and Nicaragua).

In Costa Rica, tuna fishing is particularly better from May-November. This is when you are more likely to get hooked up with bigger Tuna, and in bigger numbers. Although rare, specimens between 200-300 lbs have been caught during this timeframe on our boats! We have also had days where we have landed 10-20 Tuna in just a few hours during peak Tuna season.

We offer Tuna fishing Packages based out of several different marinas/ports throughout Costa Rica. Why not contact us today and see which option will suit your party’s needs?

If you book a fishing charter with us during peak Tuna fishing season (May-November), you will find more favorable rates and availability, as this time is what is known as “green season” or ”low season” in Costa Rica.