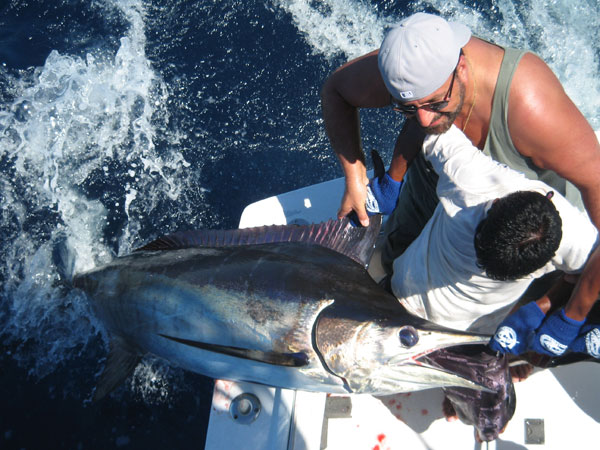 If you dream of Marlin fishing in Costa Rica, you are not alone. The immense size and speed of Marlin, along with the incredible aerial acrobatics they perform once hooked, has made it one of the most desired target species of sporting anglers world wide.

It makes sense that Costa Rica has become one of the more popular destinations for sport fishing. First off, it boasts some of the best  fishing in the world! Add to that the pleasantly calm tropical water, the friendly people, and you have the recipe for the best trip ever!

Black Marlin are generally the largest of the three, reaching up to 15+ feet in length, and about 1,600lbs+. They strongly resemble the Blue Marlin because, interestingly, they are actually blue in color. The main physical differences that distinguish them from Blue Marlin is that they lack the distinctive striping of the Blue Marlin, the dorsal fin is more rounded and their pectoral fins are much more rigid. Black Marlin are purportedly the fastest fish in the world (according to some estimates they can reach up to 80mph). They got their name because they turn black after they die.

Blue Marlin are slightly smaller (up to 1400 lbs) and slower (up to 60 mph) as compared to Black Marlin. However, they put up an equally spirited and exciting fight, making them just as much of a thrill to catch. They are distinguished by their less rigid pectoral fins, side stripes, more pointed dorsal fin, and the fact that they don’t turn black when dead. They are abundant in Costa Rican waters and our Blue Marlin Charters routinely find trophy specimens.

Striped Marlin are the smaller of the species found in Costa Rica. They reach only about 500lbs in weight and about 9 feet long. They are identified by their pronounced striping which is a brilliant cobalt blue or lavender color. Their stripes are very conspicuous and remain so even after death – a feature unique to the Striped Marlin. Make no mistake, as with their larger relatives, they are an amazing sport fish – you won’t be disappointed in the fight they put up once you get one on the line!

The best time to fish for Marlin in Costa Rica varies depending on what species you are targeting.

Black Marlin and Blue Marlin  is best from December – April, with Black Marlin specifically becoming more prevalent around April – May. Striped Marlin can routinely be caught here year round.

We can typically get you hooked into some good Marlin fishing all year long, but you may want to take the above information into account if you are looking to have the absolute best  experience that Costa Rica has to offer!

When it comes to finding the best Marlin fishing package, it is best to look for more than just the best price; it is also critical to find a crew with experience and LOCAL knowledge!

We have been fishing these waters for decades and we know all the right spots and right times to find all the different types of Marlin. In addition, you will be with crew and equipment that is top notch. Plus, we offer fishing charters from various ports throughout Costa Rica, which means we can help you experience great  fishing no matter where you plan to be.